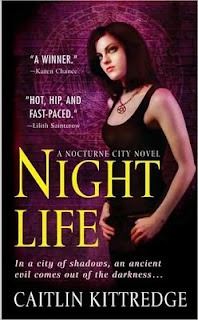 From the back cover:
Welcome to Nocturne City, where werewolves, black magicians, and witches prowl the streets at night...
Among them is Luna Wilder, a tough-as-nails police officer whose job is to keep the peace. As an Insoli werewolf, Luna travels without a pack and must rely on instinct alone. And she's just been assigned to find the ruthless killer behind a string of ritualistic murders - a killer with ties to an escaped demon found only in legend... until now.
But when she investigates prime suspect Dimitri Sandovsky, she can't resist his wolfish charms. Pack leader of a dangerous clan of Redbacks, Dimitri sends her animal instincts into overdrive and threatens her fiercly guarded independence. But Luna and Dimitri will need to rely on each other as they're plunged into an ancient demon underworld and pitted against an expert black magician with the power to enslave them for eternity.
I heard a lot about this author before I picked up the book, which led to mixed feelings while I was reading it. I wonder if I set my expectations too high, because it never quite hit the nail on the head for me.
The book opens with Luna looking at a grisly murder scene. It pulled me in, and I read the first chunk in one sitting. Luna was an interesting main character - I liked her, and I liked how she dealt with the issues presented to her over the course of the story. She was fun, and I could relate to her, which for me is important in a book.
I also liked Dimitri - very sexy, and a bit (ok, a lot) of a bad boy, which is something I find hard to resist in books. I did think things should have got further between the two of them in this book, though - or if they weren't going to, then it should have been ended differently. Their relationship didn't really fit right for the pacing around the rest of the events going on in the book, I thought.
I also didn't like the narrow-minded, racist, (watch me try to control myself with the adjectives) cops in the story. That's a peeve I've found in other books though - I just don't like it, it makes me angry, and unfortunately it makes me angry enough to stop reading. It was very tempting to do that at several points in the book.
I did enjoy this book (I'm giving it 7/10 stars) but unfortunately it's the more negative things that I'm remembering. There were too many gruesome murder scenes, and it just didn't quite pull everything off as well as it could have.
I do want to read the next one, because I think this series & the writing can go somewhere - I'm hoping that 'Night Life' gave Kittredge somewhere to smooth off the rough edges, and that 'Pure Blood' (book 2) will be able to join my shelf of 'favourite books'.
Posted by Ailsa at 9:50 PM