Welcome to another Letterbox Love post! How is everyone? I know I've said it before, but this time I'm really going to get on and start posting regularly again. I can't believe my last post was the begining of the month! It feels like it's gone really fast.

Anyway, let's cut to the chase. I'm sure I'm forgetting some ebooks here, but here are some of the books I've got or read in the last few weeks. Links go to Goodreads.

Frost Burned, by Patricia Briggs. #7 in the Mercy Thompson series. I've been looking forward to this for a while, but the hardbacks were just too expensive, and I didn't want something else to have to squeeze in my bag to bring home from America. Finally got the ebook, read it, and loved it. I'll do a review or discussion post on this one very soon.

It's In His Kiss, by Julia Quinn. #7 in the Bridgerton Family series. I was looking for some more historical romance, and I've heard a lot about this author, so picked this one up when I had some amazon vouchers. Review coming this weekend. 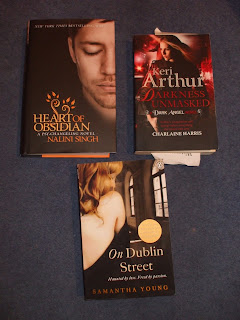 Heart of Obsidian, by Nalini Singh. #12 in the Psy/Changeling series. SQUEE!! I was so excited to finally get this book. Definitely worth spending £12 on and waiting for months, no matter how much my mum might disagree about that for a book. I'll be doing a post with my thoughts on this soon.

Darkness Unmasked, by Keri Arthur. #5 in the Dark Angel series. As you can tell by the bookmark, I'm part way through reading this, and loving it so far. Will review soon.

On Dublin Street, by Samantha Young. Read this in one day during the week, and loved it, far more than I was expecting to. Review coming very soon.

So what about you? What did you get recently? Do you have any good recommendations?
~Ailsa
Posted by Ailsa at 12:41 PM 9 comments:

Letterbox Love is hosted by Lynsey at Narratively Speaking, and Stacking The Shelves is hosted at Tynga's Reviews. Both are ways to share the books you got this week, drama free.


I'm back! It got very busy the past few months, with studying for finals and then travelling, but I'm home now, back in Scotland! And it's so nice to back. I've got a lovely few weeks ahead of me with plenty of time for reading. So let's cut to the books! I'm waiting for my copy of Heart of Obsidian, and in the meantime I have this to work on:

I bought it for my dad for Christmas, and now I'm back I finally get to read it too! He he.
Description from Goodreads: Seventeen years ago Stenwold witnessed the Wasp Empire storming the city of Myna in a brutal war of conquest. Since then he has preached vainly against this threat in his home city of Collegium, but now the Empire is on the march, with its spies and its armies everywhere, and the Lowlands lie directly in its path. All the while, Stenwold has been training youthful agents to fight the Wasp advance, and the latest recruits include his niece, Che, and his mysterious ward, Tynisa. When his home is violently attacked, he is forced to send them ahead of him and, hotly pursued, they fly by airship to Helleron, the first city in line for the latest Wasp invasion.

Stenwold and Che are Beetle-kinden, one of many human races that take their powers and inspiration each from a totem insect, but he also has allies of many breeds: Mantis, Spider, Ant, with their own particular skills. Foremost is the deadly Mantis-kinden warrior, Tisamon, but other very unlikely allies also join the cause. As things go from bad to worse amid escalating dangers, Stenwold learns that the Wasps intend to use the newly completed railroad between Helleron and Collegium to launch a lightning strike into the heart of the Lowlands. Then he gathers all of his agents to force a final showdown in the engine yard . . .

What books have you been reading recently?

Email ThisBlogThis!Share to TwitterShare to FacebookShare to Pinterest
Labels: ailsa, Letterbox Love, Stacking the Shelves
Newer Posts Older Posts Home
Subscribe to: Posts (Atom)
The Book Bundle is a review blog run by Ailsa, a Marketing Executive at a London publishing company, and Emily Cross, an Irish PhD student. We review a wide variety of books, but lean towards fantasy, YA, UF, and romance. Check out the latest reviews to see what we're loving at the moment!