I recently compiled a list of things to include in reviews, and things I like in books, so I thought I'd try writing a review using these new criteria.
WARNING: Thorn Queen is book 2, so if you haven't read Storm Born, beware of spoilers!
From the website:
"Eugenie Markham is a shaman for hire, paid to bind and banish creatures from the Otherworld. But after her last battle, she’s also become queen of the Thorn Land. It’s hardly an envious life, not with her kingdom in tatters, her love life in chaos, and Eugenie eager to avoid the prophecy about her firstborn destroying mankind. And now young girls are disappearing from the Otherworld, and no one—except Eugenie—seems willing to find out why.
Eugenie has spilled plenty of fey blood in her time, but this enemy is shrewd, subtle, and nursing a very personal grudge. And the men in her life aren't making things any easier. Her boyfriend, Kiyo, is preoccupied with his pregnant ex, and sexy fey king Dorian always poses a dangerous distraction. With or without their help, Eugenie must venture deep into the Otherworld and trust in an unpredictable power she can barely control. Reluctant queen or not, Eugenie has sworn to do her duty—even if it means facing the darkest—and deadliest—side of her nature…"
I love so much about Richelle's writing style, so I was delighted to get Thorn Queen the other day. Maybe it's slightly unfair to start with this one, then, because for me it ticks all the boxes of 'what makes a good book'.
I'll start with the characters. Eugenie, the narrator, is very believable, and it feels like every time she talks to someone, that secondary character is stepping onto the page with a fully-formed background behind them. These characters are realistic. I loved the first meeting with Dorian in this book - in that one, brief, conversation, he manages to remind us everything about him, and shows how much of an effect he has on Eugenie, even if she wants to deny it.
In this book, she's trying to come to terms with the fact that she has to live with this kingdom, and see how her actions affect it. She's also trying to keep up her work in the human world, and although she manages it for now, I can't see her sticking with it in the future. This is another thing I like about these books - Eugenie is constantly developing, but it's done subtly enough that you don't always notice it.
The plot is excellent. I was pulled in in the first chapter, where we get to see a little of Eugenie doing her 'normal' work, and banishing a ghost. Then, it's back home, where the issues with her boyfriend, Kiyo, are brought up. And I was firmly hooked with the last line of chapter one: "I was going to a gentry baby shower." The pace keeps up throughout the story. In 'Sucubus Blues', the first of Richelle's books I read, the main character only reads 5 pages a day of books by her favourite author, to make them last longer. I'm not that optimistic, so I aimed to keep this to a chapter a day, but unfortunately, I gobbled through it in two days. I just couldn't put it down, even though I knew that I'd have to wait months once I finished to get the next book.
The ending is satisfying too - it ties up the main issues in Thorn Queen, but other things that I think will span the series have to wait for the next book to show the next piece of the puzzle.
Woven into the plot is the sizzling romance between Eugenie & Kiyo, the various tensions there, and Dorian's charm and, for want of a better term, general sexiness. Eugenie has to spend more time with him for political reasons, and I love any scene where the three of them are together, because the dialogue gets quite... interesting.
Overall, I think this book has to get 9 stars, if not 10. Ah, stuff it, I'll give it 10, because I'm not sure what would have improved this book!
Posted by Ailsa at 6:32 PM No comments: 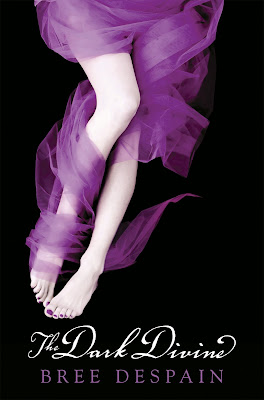 Hey all, Just a small note about out Bree Despain, whose hosting a competition this month for her upcoming debut book 'The Dark Divine'. First off can i just say that this cover is AMAZING!!

Anyhoo, Bree is holding a competition for her readers which includes the following prizes:

So head on over and check it out! Exciting stuff!
Posted by Emily Cross at 12:13 PM 3 comments:

YAY!! We got nominated for the Book Blogger Award for Best General Review!!

And thank you to the person/people who nominated us!
Posted by Emily Cross at 5:05 PM 1 comment:

Karen Mahoney (click) is giving away several fantastic YA books at the moment.
There will be three winner.
First prize: Poison Study; Magic Study; Fire Study - by Maria V Snyder

All you have to do is leave a comment here telling Karen the last young adult book you read. You've got until Friday, the 21st.
Posted by Ailsa at 8:44 PM No comments:

Email ThisBlogThis!Share to TwitterShare to FacebookShare to Pinterest
Labels: competition 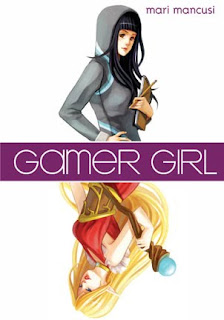 I guess 94/\/\3R 91RL was probably too convoluted for a publisher to run with, so the title of the book is actually Gamer Girl. I get that. Really. I do. Onto the review! I thought people might start rioting if I didn't start reviewing again.

Gamer Girl by Mari Mancusi should have actually been titled A Girl Who Games. As any internet nerd will tell you, a "Gamer Girl" only plays games to win the affections of video game nerds. A "Girl Who Games" is a girl who likes to play video games. That's what I am, so I know the difference, the author knows the difference and now you do too. bBut, again, for the purposes of the publishing world the title is Gamer Girl and is about a girl who games. I just wanted to be clear on that. Its also possible that I'm stalling.

I really adored this book and not because its secretly about World of Warcraft (Mancusi calls it Fields of Fantasy... she might as well have called it Planet of Battles, but "FoF" looks better and more like "WoW") I loved it because Mari Mancusi managed to capture the essence of teenage drama, first loves and online gaming and she's made it accessible to anyone. (And she adds in some internet safety too, kudos!)

If you know anyone who plays an MMO you can attest that listening to them speak about it is like listening to Portuguese. I know not only because I speak this weird language, but I wrote a linguistic anthropology paper on it in college. Yea, I'm that much of a nerd. Mancusi did a geart job of not using these gaming terms. At first it was a little obnoxious (omg, call it a MOB!) but after a chapter or two you start to understand that not every reader knows what DOTs or DPS means. Spells and "beating it up" sound just fine and they mean the same thing. ;)

On top of toning down the innate language she does a really fantastic job of making the story seem totally real. Its an age old story, a girl and guy fall for each other in secret, neither knows who the other is and when they do find out, its awful, they're in different cliques, it'll never work, it gets worse and then they suddenly end up together and live happily ever after. Having gone to a weird awesome high school where social hierarchy was limited to who was a student and who was a teacher (and let me tell you, even that line got blurry sometimes) reading or watching things where the popular kids "own the school" and the sub defectives try to keep to themselves for risk of being hazed is like watching National Geographic for me. I just don't get it. But I know about it and I know that this story does a good job of going there. The difference between this and all the other "Cinderella" stories is the way Mancusi weaves in plots and points from the video game into the real world. The main character is also writing a manga that mirrors the books main plot as well.

I'm a sucker for multiple plot paths all pointing in the same direction. I love mirrored allegory and I love video games and the fact that Mancusi gone to Scott Westerfeld-like lengths to wrap her characters gaming experience into her real life and that character's manga makes me really appreciate her ability to tell a story from multiple angles. Aside from being really well written, Mancusi also takes time to set some women empowerment into her story, which I think is a huge plus for any YA novel these days. Girls don't go around sniveling for boys anymore. They stand up for themselves (in the end anyway) and its totally clear that they would be just fine sans the boy. But, you know, they're fun to kiss (and they make great tanks!) I think Mari Mancusi and I would get along real well in real life.

What can i say? I began this book at about 2am and at 6.47am, i am sleep deprived but it was worth it!

The Time Travellers Wife is a story of the 'real' love between Claire and Henry through time and thier lives. Nicely written, this book leaps back and forth through time but still paints a coherent picture. I loved dipping in and out of this book,experiencing the justipositioning of Claire's youth and Henry's middle age.

This is just a beautifully story, written in an amazing way that grabs you and won't let you go till you've read that sweet ending with a tear soaked face.

Email ThisBlogThis!Share to TwitterShare to FacebookShare to Pinterest
Labels: 10 stars, Adult, Emily Cross, Fantasy, Fiction, romance
Newer Posts Older Posts Home
Subscribe to: Posts (Atom)
The Book Bundle is a review blog run by Ailsa, a Marketing Executive at a London publishing company, and Emily Cross, an Irish PhD student. We review a wide variety of books, but lean towards fantasy, YA, UF, and romance. Check out the latest reviews to see what we're loving at the moment!