I've planned a couple of reading/blogging goals for myself to aim for in 2018, which I'll post more about next week, but I've also decided to join in on the Science Fiction vs Fantasy Bingo that Ellie at Curiosity Killed the Bookworm has set up. It's a simple bingo card of themes etc in SFF books, and they're all quite broad categories, as you can see: 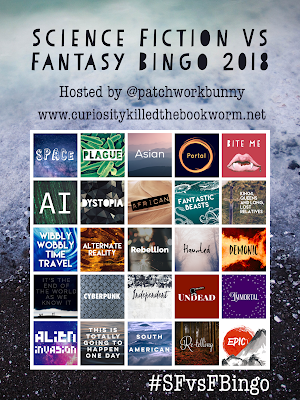 I can already think of a few books from my shelves that will fit some of these categories, and I think it'll be another fun way of choosing what to read.

If you'd also like to take part, Ellie is running a giveaway for people who sign up on her original blog post, here. Let me know if you're doing it!
-Ailsa

‘Somebody’s going to be murdered at the ball tonight. It won’t appear to be a murder and so the murderer won’t be caught. Rectify that injustice and I’ll show you the way out.’

It is meant to be a celebration but it ends in tragedy. As fireworks explode overhead, Evelyn Hardcastle, the young and beautiful daughter of the house, is killed. But Evelyn will not die just once. Until Aiden – one of the guests summoned to Blackheath for the party – can solve her murder, the day will repeat itself, over and over again. Every time ending with the fateful pistol shot. The only way to break this cycle is to identify the killer. But each time the day begins again, Aiden wakes in the body of a different guest. And someone is determined to prevent him ever escaping Blackheath...

My thoughts: The premise of this book caught my attention right away: someone repeats a day again and again in a different body each time, until he can solve a murder. And having read it over the past week, it's snuck in at the last minute to be one of my favourite books of the year. I'm already planning to buy copies for a couple of people when it comes out.

The tension kicks in on page one and barely lets up through the entire book. At first, Aidan has no idea what's going on. Gradually he's given instructions and starts trying to put everything together. Stuart Turton's fantastic plotting means that every little conversation you see has a significance, every detail or interaction is important. It's a long book, but it didn't feel like it dragged at any point - I was on the edge of my seat through the entire thing. There are so many twists and turns.

The story takes place at Blackheath House, a crumbling manor deep in the woods. It's the age where guests arrive in horse-drawn carriages, and when someone is offered the option of driving a car to the village, he's horrified at the idea of getting in the vehicle at first. It's a dark, atmospheric setting, and combined with the intricate murder investigation I was strongly reminded of Agatha Christie books.

I can't say much more about the plot without giving things away, but I don't think I need to: Aidan does his best to investigate the murder, talking to various characters and trying to piece together the puzzle of what's going on in the present day, and what happened nineteen years ago when Evelyn's younger brother was murdered. It's clear early on that there's a connection between them, and he hopes that by figuring out the truth of the first, he might untangle what's going to happen to Evelyn and why.

The Seven Deaths of Evelyn Hardcastle is an incredible book. Stuart Turton has done a great job of keeping the tension high throughout the entire book. It's like The First Fifteen Lives of Harry August crossed with your favourite Agatha Christie novel. If you love a good mystery novel, I one hundred percent recommend it. Ten out of ten.
Posted by Ailsa at 9:57 PM No comments:

Book review: I Am Thunder by Muhammad Khan

Description: Fifteen-year-old Muzna Saleem is passionate about writing and dreams of becoming a novelist. There’s just one problem - her super-controlling parents have already planned her life out for her: Step 1) Get educated. Step 2) Qualify as a doctor. Step 3) Marry a cousin from Pakistan. Oh, and boyfriends are totally haram. No one is more surprised than humble Muzna when high school hottie, Arif Malik, takes an interest in her. But Arif and his brother are angry at the West for demonizing Islam and hiding a terrible secret. As Arif begins to lead Muzna down a dark path, she faces a terrible choice: keep quiet and betray her beliefs, or speak up and betray her heart? I Am Thunder is the debut novel from stunning YA voice, Muhammad Khan, which questions how far you'll go to stand up for what you believe.

My thoughts: I heard about this book when the publication deal was announced in The Bookseller magazine, and thought it would be very interesting to read this sort of book written by someone who is actually Muslim. The book begins with Muzna as a 13 year old, and it introduces what life is like for her. Her parents already have high expectations for her and are determined that she'll be a doctor one day. They disprove of her friend who is becoming more interested in boys, and who they believe is leading Muzna astray from being a good, dutiful daughter. While I liked this section of the book in that it set up the family, their expectations, as introduces some of the racism that the whole family faces in everyday occurances, Muzna herself annoyed me quite a bit - she makes some very silly choices and I was quite skeptical that in this day & age any teenager would be that ignorant.

The story then jumps forward to Muzna when she's about 16 (if I remember correctly). She moves to a new school, and it's the opportunity of a fresh start. I loved the supportive English teacher, and how he tries to encourage Muzna, and handle the anger and racism amongst his class. You could definitely tell in the classroom scenes that the author Muhammad Khan has worked as a teacher in the past.

I thought that the slow steps Muzna is lead down towards extremist views were quite believable. It was done in small enough increments that you could see why she was agreeing to Arif's suggestions and going along with his view of Islam. There were times again where I wanted to shake her because she couldn't see that teachers and friends were genuinely concerned about her and wanted to help her, and that she'd drastically changed from who she had been before she met him.

I found I Am Thunder to be a really interesting book giving a believable look at how young women can be radicalised. It was also very educational for me to read another book about someone from a Muslim & Pakistani background, as I really don't know as much about the culture as I should. That said, the book wasn't quite as interesting or gripping as I had hoped. Taking that into account, I'm giving it 6/10.
Posted by Ailsa at 1:13 PM No comments:

Description:
Christmastime in Paris... Thomas Harding travels to the City of Lights, a packet of cherished letters in hand... letters that tell a story of love a loss, friendship and family, and the innocent hopes of a generation devastated by war. As he reads the letters one more time, Tom is transported back to 1914 and the sunlit August day when Evie Elliott waves goodby to him and her brother Will, as they head to the Western Front.

All believe the war will be over by Christmas when the trio plan to reunite and celebrate the holiday among the romantic cafes of Paris. But it is not to be. As months slip into years, Tom's and Evie's lives become bound together by the letters and telegrams, notes and stories that travel between them, from the front line in France to a quiet suburb of London. But as their friendship flourishes, there is far more than words held between the pages of Tom's and Evie's letters.
Now, decades later, Thomas finds himself once again in his beloved Paris, determined to fulfill a last promise and to lay to rest the ghosts of the past... but one final letter is waiting for him.

My thoughts:
The basic premise of Last Christmas in Paris is quite straightforward: Evie and Tom write letters to each other during the First World War, with occasional letters to other friends and family included too. Tom and Will go off to France all excited, eager to do their part, sort out the enemy, and meet their friends a couple of months later. We all know how it actually turned out, and the horrors of the Front.

I loved that it was all told in letters, and I found it very quick to read in that format - 'just one more letter' is a lot faster than 'one more chapter', so I'd end up reading far more at once than I expected to! It was really interesting seeing how their lives developed, and how things went unsaid, and their slow realisation that in fact they did love each other. But the framing of the story is that Tom is rereading these in Paris years later, and it's vague enough that you really don't know up until the very end if it all turns out ok for them. I liked the fact that that tension remained throughout the whole book.

Although this is a fairly typical war story, with ups and downs and lots of personal growth and a slow building romance, I did really enjoy it, and was in tears in several places. A well written book, in a really enjoyable format that managed to sustain the tension right through to the end. Overall I'm giving it 7 out of 10.
Posted by Ailsa at 10:02 AM No comments:

Email ThisBlogThis!Share to TwitterShare to FacebookShare to Pinterest
Labels: 7 stars, Fiction, hazel gaynor, heather webb, Historical, historical fiction, world war one, WWI
Newer Posts Older Posts Home
Subscribe to: Posts (Atom)
The Book Bundle is a review blog run by Ailsa, a Marketing Executive at a London publishing company, and Emily Cross, an Irish PhD student. We review a wide variety of books, but lean towards fantasy, YA, UF, and romance. Check out the latest reviews to see what we're loving at the moment!