Jessica's Guide to Dating on the Dark Side by Beth Fantaskey 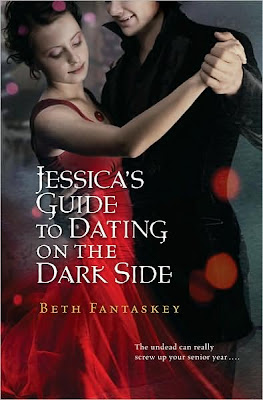 If you like vampires and romance, you'll definitely want to read this debut novel by Beth Fantaskey!  It's not the kind of story you would expect it to be either.
So, since I'm horrible at the summaries of stories (I tend to review while summarizing most of the time I noticed), here's the summary of the story from Goodreads.com.
The undead can really screw up your senior year ...

Marrying a vampire definitely doesn’t fit into Jessica Packwood’s senior year “get-a-life” plan. But then a bizarre (and incredibly hot) new exchange student named Lucius Vladescu shows up, claiming that Jessica is a Romanian vampire princess by birth—and he’s her long-lost fiancé. Armed with newfound confidence and a copy of Growing Up Undead: A Teen Vampire’s Guide to Dating, Health, and Emotions, Jessica makes a dramatic transition from average American teenager to glam European vampire princess. But when a devious cheerleader sets her sights on Lucius, Jess finds herself fighting to win back her wayward prince, stop a global vampire war—and save Lucius’s soul from eternal destruction.
So, I keep running into all these books that I like!  I hear about them once, read a review about them or see something come up about the author.  This is how I heard about Jessica's Guide to Dating on the Dark Side.  I was perusing another website that does reviews and saw that the author did a guest blog.  I read the blog and I loved it.  I still wasn't sure I wanted to read a book that sounded like an actual self-help book though.
Truly, that is what this story sounded like to me, but really, it's a fabulous story.  Yes, it has the same, girl sees new hot boy at school, school can't stand him at first, finds out he is jealous, so she dates another boy that she really likes because she hates new boy and then falls in love with new boy once he starts showing interest in another girl.  Sorry about the run on...that's how my mind is working at the moment.  But yes, I loved the storyline.  It carried everything that I look for in a story.  Drama, romance, the hot guy (always have to have at least one), comedy, and awesome character development.
Beth created Jessica and Lucius as if they were actually real people who sat down and told her their story.  Mostly I say this because you get Jessica's point of view throughout the book, but Lucius still has  letters to his Uncle Vasile in the story where you get his point of view and his feelings for what is going on around him.  These two characters are amazingly written.  Personalities flow together and apart, and really, I enjoyed every second I read them.
Jessica is the dark, curly haired adopted child of two vegan parents and lives on a farm in rural Pennsylvania.  Loves math, and loves to ride her horse, Belle.  Everything about her screams NORMAL teenager at the beginning.  Then enters Lucius.  The luscious Romanian who claims he is a vampire prince come to claim his bride which is Jessica.  I love the banter and unbelief that these two have for each other and even the smallest moments between them become the strongest in the building of their relationship together.  Jessica is written very well to be the normal teenager, but as she starts to believe more of what Lucius tells her about herself and her lineage, she begins to believe.  However, when Lucius appears, he is adamant and very chivalrous toward Jessica and treats her the way a princess should be treated.  Nevertheless as Jessica begins to believe what she has learned, Lucius falls away and rebels against it all.  It's a fantastically written flip-flop of characters.  The development and devolving states they both go through.
Again, Beth Fantaskey has made me a believer and also made me want to go to Romania and visit there someday.  Her writing voice is strong and humorous and never fails in keeping you moving forward throughout the story.  A fantastical adventurous read that will have all the ladies looking for Lucius and his velvet coat.
Hey, maybe I'll take a trip to Pennsylvania to look for him myself...
Posted by JessG at 2:50 AM 4 comments:

I have to say that I am addicted to young adult and children's books right now.

YA--because I have always read them since a kid and also as a wanna-be author, I write young adult stories and so, in fact, read them for that as well.
Children's--because I have a cute little 5 year old that LOVES reading.  I have read many many cute picture books to my child lately and I can't wait to see what comes next.  I mean, who doesn't love the Berenstain Bears or Fancy Nancy?
But this review isn't about the differences between the two genres.  It's because I've just finished this book, Claire de Lune by Christine Johnson.
Claire de Lune covers the story of Claire (obviously) who on her sixteenth birthday realizes that she is part of a pack of werewolves that come of age for transforming their third full moon after their sixteenth birthday.  But also finds that the high school soccer star, Matthew, likes her.  Only to know that the biggest problem is that Matthew's father is out to catch and "cure" every werewolf in the world.
This story is full of the trials of harboring secrets, keeping them safe and the mystery of one wolf who is out killing humans so now the entire pack is in danger.  And even though I felt that the story moved a little slow for my taste, it was constant.  Christine did a fabulous job keeping the mystery there, and the development of her main character, Claire going.  I have to admit that at first I didn't think I would like it despite the really pretty cover.  I had finished Linger by Maggie Stiefvater at the time I discovered this book and really wasn't in the mood for more werewolf stories.  But when I learned more about the author and more about the story through other reviews I had read, I had to get it.  I am glad I read this story.

The main character, Claire, is such a strong person.  At first in the book I was worried at how calm she was when she found out about being a werewolf.  It seemed too natural for her to really be worried about the discovery.  But as I kept going, I saw the worry, I saw the strength grow in her to really appreciate her gift even though it still freaked her out.  Even when she began to date Matthew, I hated that she had to lie about these new changes in her life.  I started to feel stronger myself as I read Claire's story.  A lot of stories I have read--and enjoyed--have whiny main characters.  This one does not.  I'm not used to the strong protagonist in this way, but I like it.

I don't want to give too much away because this is the first story for Claire.  The second, Nocturne, isn't due out for some time right now, but I will pick it up when it does.

And lately, I've been reading through author, Christine Johnson's blog and really enjoy it.  Go check it out if you haven't yet.  http://www.christinejohnsonbooks.com/blog/
Posted by JessG at 3:00 AM 2 comments:

Email ThisBlogThis!Share to TwitterShare to FacebookShare to Pinterest
Labels: 8 stars, JessG, werewolves, Young Adult
Newer Posts Older Posts Home
Subscribe to: Posts (Atom)
The Book Bundle is a review blog run by Ailsa, a Marketing Executive at a London publishing company, and Emily Cross, an Irish PhD student. We review a wide variety of books, but lean towards fantasy, YA, UF, and romance. Check out the latest reviews to see what we're loving at the moment!