Book review: Ramses the Damned by Anne and Christopher Rice 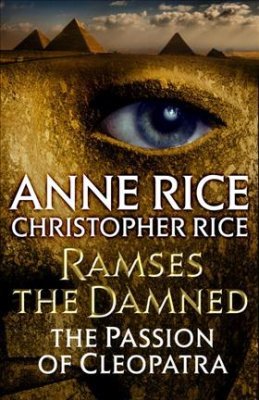 Description:
Ramses the Great, former pharaoh of Egypt, is reawakened by the elixir of life in Edwardian England. Now immortal with his bride-to-be, he is swept up in a fierce and deadly battle of wills and psyches against the once-great Queen Cleopatra. Ramses has reawakened Cleopatra with the same perilous elixir whose unworldly force brings the dead back to life. But as these ancient rulers defy one another in their quest to understand the powers of the strange elixir, they are haunted by a mysterious presence even older and more powerful than they, a figure drawn forth from the mists of history who possesses spectacular magical potions and tonics eight millennia old. This is a figure who ruled over an ancient kingdom stretching from the once-fertile earth of the Sahara to the far corners of the world, a queen with a supreme knowledge of the deepest origins of the elixir of life. She may be the only one who can make known to Ramses and Cleopatra the key to their immortality--and the secrets of the miraculous, unknowable, endless expanse of the universe.

My thoughts:
The book opens with a preface that sums up some key events that happen before the start of the story, and touches on some of the main characters. I found it very odd that some of the book reads like a sequel, while large portions of it don't, and nowhere on the proof did it suggest it was a sequel. Goodreads, however, says that it is book two of the series. I think it worked fine to read it without having read the first book, but it's something to keep in mind.

Ramses, former ruler of Egypt, is an immortal and has recently woken up in 1914 after hibernating for hundreds of years. He's heading to England with his fiance for an engagement party, but both of them are troubled by thoughts of Cleopatra. Ramses used the magical elixir that gave him immortality to resurrect her mummified body, but she ran away and now they fear she'll come after them and attack them. Added in to the mix are two other immortals who are far older, who have yet to meet Ramses but have heard rumours about a mummy coming to life and guess that he might be immortal.

I liked that none of the characters are 100% likeable - they're all flawed in some ways, and make dreadful assumptions about each other and the motives of other people. Ramses and his fiance Julia both presume that Cleopatra is mad and that she means them harm. Cleopatra thinks Ramses hates her and wants to kill her. It made me want to shake them sometimes and tell them they were being silly, but it also made the multiple points of view in the story more interesting to read, because you get to know the true motivations and also see how their actions are misinterpreted.

The writing style is quite old fashioned. In some ways this fit with the time: the way Julia and another character, Sibil, narrate their parts makes sense, as they're born into the early 1900s. At other times I felt like there was just too much description when I wanted to get on with the action of the story.

It's an interesting story that looks at some of the moral and philosophical problems of these immortal creatures, how characters may or may not change over time, and how both humans and immortals are affected and changed by their experiences. I enjoyed the story a lot, even though it wasn't as fast-paced as some books, and I'd definitely like to read the next book in the series to see what happens next. Although some plot threads are left unresolved, the book does have a satisfying conclusion. I'm giving Ramses the Damned 6 out of 10.
Posted by Ailsa at 2:05 PM 1 comment: 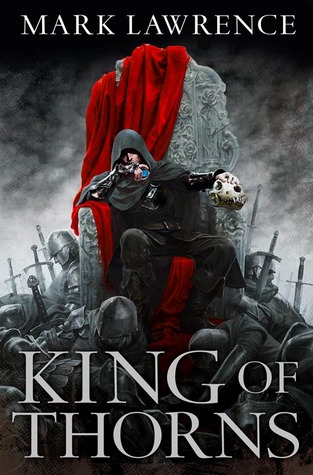 Description: To reach greatness you must step on bodies. I’ll win this game of ours, though the cost of it may drown the world in blood…

A six nation army marches toward Jorg's gates, led by a shining hero determined to unite the empire and heal its wounds. Every omen says he will. Every good king knows to bend the knee in the face of overwhelming odds, if only to save their people and their lands. But King Jorg is not a good king.

Faced by an enemy many times his strength, Jorg knows that he cannot win a fair fight. But playing fair was never part of Jorg’s game plan...

My thoughts: I love a good epic fantasy, and all of Mark Lawrence's books are that promising door-stopper size that suggests a good adventure happens within the pages. King of Thorns is book two in the trilogy, and picks up about four years after the end of book one. I was a bit thrown off by this, as it seems like a lot has changed, and I wondered if I'd misremembered the ending of book one, but luckily the story splits into two timelines: one carrying on in the present day, and one that starts four years previously and gradually shows how Jorg got from where he was to where he is now.

It's a fairly grim series in a lot of ways. Jorg hasn't had an easy life and it doesn't get any better. But despite that, he fights his corner and has quite a lot of luck to help him out. I like that there's a strong 'characters move from city A to city B and encounter various stumbling blocks on the way' plotline to the book, and that Jorg's personality continues to evolve as he grows up and experiences more. It was a satisfying book, and once I got stuck in, I couldn't put it down. Luckily I already have book three, so I'll be starting that one soon! I'm giving King of Thorns 7 out of 10.
Posted by Ailsa at 9:34 PM 1 comment:

Description: The world has become a battleground in a war which no side is winning. But for those determined to retain power, the prolonged stalemate cannot be tolerated so desperate measures must be taken.

Max Halloran has no idea. He's living the brief and glorious life of a hunter-killer pilot. He's an ace in the air, on his way up through the ranks, in love, and with his family's every need provided for in thanks for his service, Max has everything . . .

. . . right up until he hears something he shouldn't have, and refuses to let it go. Suddenly he's risking his life and the lives of all those he cares about for a secret which could expose corruption at the highest levels, and change the course of the war.

My thoughts: I wasn't sure what to think of this book going in to it: the cover said sci-fi, kind of, and the description puts it on future earth. But my boyfriend insisted I would like it, so eventually I listened... and I really enjoyed it! The set up for the story is that at some point, humans obtained some alien DNA samples from an asteroid or something like that, and reverse engineered it to end up with various giant lizards which can be controlled. There is some debate over where these things are machines, or have some kind of sentience. Max and his fellow pilots live on a giant ship, except the ship is actually an enormous reptile engineered to be filled with human living quarters, storage areas... everything they need. Max is a fighter pilot, but rather than a small aeroplane, he flies a dragon, by sitting inside a pouch on the front of the animal and linking in to its brain.

All this is fed out to the reader in little moments. It took me a bit of time to get used to that and to have a clear picture of what was going on, but it gets better. I think James Barclay was trying to be intriguing at the start and create a sense of 'ooh, what cool thing is happening here?' but for me it didn't work. Thankfully, the politics of the war and their role in it, and the smaller ship-board politics, soon becomes the focus of the story. Max is not a sit-down-quietly sort of guy. He's arrogant and short-tempered, which quickly gets him in trouble, but he cares deeply for his squad and works hard to protect them.

It's a gripping, intense story, with dragons done in a new way. I really can't go in to many more details without spoiling things, but I loved Max's character growth over the story. Many parts of the book made me think of it being Top Gun but with dragons, which was a lot of fun to read! I highly recommend this book - 8 out of 10!
Posted by Ailsa at 2:03 PM 1 comment:

Email ThisBlogThis!Share to TwitterShare to FacebookShare to Pinterest
Labels: 8 stars, dragons, Fantasy, heart of granite, James Barclay, Science Fiction
Newer Posts Older Posts Home
Subscribe to: Posts (Atom)
The Book Bundle is a review blog run by Ailsa, a Marketing Executive at a London publishing company, and Emily Cross, an Irish PhD student. We review a wide variety of books, but lean towards fantasy, YA, UF, and romance. Check out the latest reviews to see what we're loving at the moment!