Rock and a Hard Place by Angie Stanton

Before I start, I have to say that I have absolutely fallen in love with user reviews on Amazon! I am took a writing break last week (with the minor exception of jotting down ideas that pop into my head so I won't forget them) and so I started browsing Amazon. I've shopped on the site before, but I usually I already knew what I wanted. I've never taken full advantage of the user reviews. I have read twenty-two books in the past ten days (no, I'm not joking, though part of me kind of wishes I was... that much reading might be a sign of some kind of illness) and most of them I would rate at least 4 stars. Even the worst of them would get 3. I bought them based on a few factors, but the deciding point was always the user reviews and so far they have not steered me wrong! Okay, I'm done gushing about the opinions of random strangers. Onto the books! 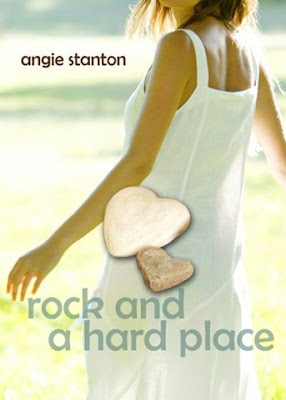 Libby's entire family was in a horrible car accident. Only Libby and her father walked away, but her father walked away broken and reeling from the loss of his wife and second daughter. Lost in depression, he drops Libby off with her mother's sister, a cranky woman known in town for her temper and her eccentricities. Libby longs for her father to return, but it's been a year and she hasn't even had a letter from him. She has no idea where he is or how to track him down, but even if she did how can she start when she has no phone, no computer, no money, and no friends?

Peter Jamison has lead a life a lot of people dream of, especially since the band he and his brothers formed put out a chart-topping rock album. He writes the songs and he loves performing, but what he really wants is someone who sees who he is behind the rock star, someone who doesn't care about the fame and the fortune. One day when his family's tour bus stops in an out of the way park in Alabama, he meets Libby who amazingly has no idea who he is and has never even heard about his band. Instantly captivated by this refreshingly honest girl, Peter convinces his family to return to this spot between shows so he can get to know her better.

Libby is thrilled to have a friend, someone she can talk to, but Peter's family isn't so happy about this country girl who keeps distracting him from his responsibilities in the band. His older brother makes a choice and Peter loses contact with Libby just when she needs him most. Abandoned and alone, Libby is struggling for her very survival while Peter desperately searches for the girl who has stolen his heart.

I LOVED this book. All of the characters, not just Libby and Peter, were well developed and interesting and the dynamics of this dual narrative drew me in instantly. Peter's family is believable and their interactions well written. Certain sections of Libby's story almost made me cry. I liked Libby's quiet strength and her determination to persevere despite all the obstacles life has thrown in her path and Peter's devotion would have outweighed a lot of faults... but he didn't have any. Peter is actually the paragon of rock stars, exactly the way you hope all your idols are in real life, but his family has a lot to do with that, I think. His parents are both painted as loving and supportive, even if they (like everyone) make mistakes along the way.

Without being overly serious and weighed down by the issues present in this book, Rock and a Hard Place manages to remain uplifting. It's a testament to the power of love, hope, determination, and trust and I highly recommend it to anyone who likes contemporary YA.

Email ThisBlogThis!Share to TwitterShare to FacebookShare to Pinterest
Labels: 10 stars, Angie Stanton, Rock and a Hard Place, Sera Phyn, YA