Review: The Name Of The Star, by Maureen Johnson 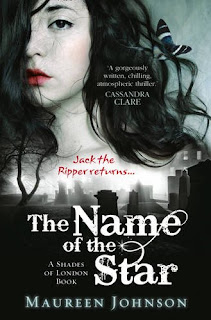 Title: The Name Of The Star
Author: Maureen Johnson
Publisher: Harper Collins (UK)/Putnam Juvenile (USA)
Release Date: 29th September 2011
Source: Bought in Waterstone's, Glasgow
Notes: Book 1 in Shades of London series
Description: Louisiana teenager Rory Deveaux flies to London for the start of a new life at boarding school. But her arrival is overshadowed by a sudden outbreak of brutal murders, gruesome crimes mimicking the horrific work of Jack the Ripper.
'Rippermaina' grabs hold of London, and the
police are stumped with few leads and no witnesses. Except one. Rory has seen their prime suspect on the school grounds. But her friend Jazza didn't see anyone.
So why could only Rory see him? And what is he planning to do next?
My thoughts: I tried very hard not to buy The Name Of The Star (I really couldn't afford to at the time), but I'd been interested from the words "Jack the Ripper", and I saw so many glowing reviews, so when I found it reduced in the shop, I ended up taking it home. Over the next three or four nights, I regretted reading it at bedtime, and had to repeatedly check behind my curtains and in the wardrobe for monsters before I could go to sleep. For a YA book, it does a very good job of making you jump at shadows.
For those unfamiliar with who Jack the Ripper was, in London in the 1800s, someone brutally murdered several prostitutes, and was never caught. I knew the story when I was younger, and on a school trip to London when I was 12, we visited the London Dungeon, which has an excellent Ripper exhibit. I was fascinated by the story, this horrible murderer who couldn't be caught, even though there were various theories of who it might be. From some things I've read on twitter, I think Maureen Johnson has some of that same curiosity.
Rory's parents, both university professors, are coming to spend a sabbatical year in England, so Rory has picked a London boarding school to spend her senior year at. The book starts with her first arriving, and goes through her first few weeks at school, with the usual new-school things: making friends, different classes, and people who aren't so nice. There was no clique of mean-girls, which I think made it much more realistic, and thankfully, all of the Britishisms were pulled off well. (It's a pet peeve of mine when authors put in "British slang" and it comes across as forced and awkward.) You can tell that Ms Johnson has spent time in Britain and understands what it's like in school, and how to write Britishisms without it seeming forced. As Rory adjusts, the Ripper story is there in the background, something she hears about on the news. Wexford (her school) is quite close to some of the crimes, and she visits a couple of the scenes with other curious school friends. Even in the little snippets about the Ripper, you quickly see that something is not normal - he seems to be invisible on CCTV, and no one can figure out how he keeps slipping past police. You could feel the menace of the mystery figure, and the tension & nervousness that were starting to grip London as the murders continued and the police didn't catch him.
Part way through, Rory learns something, and the book shifts, and everything steps up a gear. It's a clear before/after point, and I loved it. Yes, I'd guessed before we found out what it was, and I think a lot of people will, but after the revelation, everything gets much more interesting, and there is so much more pressure to figure out what is going on, and why Rory is being caught up in it. I loved trying to piece together the clues in the second half of the story, and despite again having some guesses which turned out to be right before the characters figured it out, it didn't do anything to stop the tension in the book, or make me get bored with it. I really loved this story.
I'm not sure how I feel about the end. All the important story points are tied up nicely, and although you can see as you read that the book could go on as a series, it's not until the last two or three pages that it's clear there's going to be a sequel. Those last few paragraphs leave some big questions, and although it's not what I'd call a cliffhanger, I'm very eager for the next book. I'm looking forward to seeing what direction the Shades Of London series goes in now, as the Ripper angle seems to be done, and that's going to be a hard act to follow.
I really loved The Name Of The Star, so I'm giving it 9 stars.
Has anyone read it? What did you think about it, the ending, and the bits you could guess at? Where do you think Maureen Johnson will go next with the series? Let me know in the comments!
~Ailsa
Posted by Ailsa at 1:42 PM

Email ThisBlogThis!Share to TwitterShare to FacebookShare to Pinterest
Labels: 9 stars, ailsa, horror, Maureen Johnson, Paranormal, The Name Of The Star, YA, Young Adult