Heart on a Chain by Cindy C. Bennett 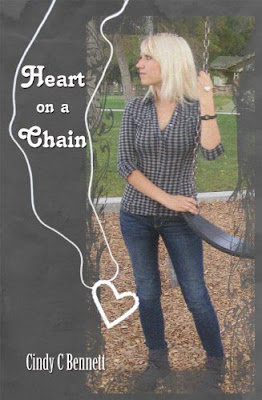 Kate lived a normal live once, but it was so long ago she barely remembers what that was like. After her father lost his job and her mother miscarried, Kate's life was never the same again. Her father started staying out and drinking. When he did come home, it was only to vent his anger on Kate's mother. It didn't take long for Kate's mother to turn her frustrations on the only person left: Kate. Without any friends or anyone she trusts to turn to, Kate is left to suffer in silence as her mother slowly kills her spirit.

Henry Jamison knew Kate when they were little and he thought she was beautiful, kind, vibrant, and smart. But then his family moves just as he and Kate begin to realize how much they care about each other. Six years later Henry moves back and he can't understand what happened to the little girl he once knew. He'd never forgotten her, but now she runs if he even tries to say hello. The other students either ignore or antagonize her and it doesn't seem like he'll ever be able to break through the walls she's erected around herself. Will Kate be able to trust his intentions or will she fail to recognize the first person to see through her protective barriers and care about the person underneath? What happens when an unthinkable tragedy threatens the delicate balance they've found?

This book is beautiful, heartbreaking, and hopeful. Bennett has created characters who live and breathe on the pages--even some of the minor characters--and she sucks you into a world no one wants to live in yet people somehow survive. The tormenting Kate suffers at school may seem overblown, but having seen it in action during my childhood I can say it's not overdramatized by much. The cruelties of children are equalled by their kindnesses. It's a strange phenomenon. This is also true of the families presented in the book. Henry's family is almost too good to be true: loving, warm, generous, accepting and a perfect foil to the cold, angry home Kate has grown up in. Bennett shows readers both extremes of the spectrum and somehow manages to give the book balance, not letting it get too dark or overly fluffy and light.

Henry doesn't ride in to her rescue as much as give her a place to turn when things get bad. In fact, for most of the book he has no idea what's going on. He has suspicions that something isn't right, but coming from his loving household, it's hard for him to conceive of the abuse Kate is suffering. He is steadfast, protective, and sweet and the growing love between the two teens is a major part of what drew me into the story.

One of Kate's strengths is her ability to forgive and let go even when faced with those I don't know if she should forgive. Some people may interpret this as weak--I've seen a couple of reviews who really railed on her for this--but I think it takes a much stronger character to let go of grudges than hold onto them. By doing this Kate is not only helping herself move past this horrible phase in her life, she's (hopefully) helping the others grow and learn from her example. Just by being who she is, Kate changes the lives of the people around her. She never even realizes she's doing it. I think a lot of people underestimate the quieter kinds of power and strength.

A warning to the squeamish. There are a couple of rather brutal physical abuse sequences, so just be aware of that before picking up the book.