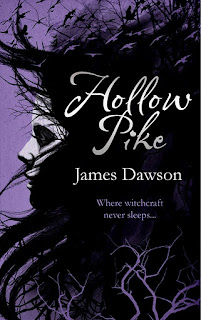 Title: Hollow Pike
Author: James Dawson
Publisher: Indigo (New YA imprint from Orion)
Release date: 2 February 2012
Source: ARC from publisher
Description: She thought she'd be safe in the country, but you can't escape your own nightmares, and Lis London dreams repeatedly that someone is trying to kill her.
Lis thinks she's being paranoid - after all who would want to murder her? She doesn't believe in the local legends of witchcraft. She doesn't believe that anything bad will really happen to her. You never do, do you?
Not until you're alone, in the woods, after dark - and a twig snaps...
My thoughts: From the moment I read the description of this book back in November/December, I wanted to read it. I can totally relate to the paranoia here - I come from the middle of nowhere, and when I'm walking the dogs on my own, I always get jumpy. You don't really think someone is there, but if you here a sudden noise, it puts you really on edge. I love how, in the few sentences on the back cover it captures that jumpiness, which is something that runs throughout the book.
Hollow Pike was... not quite what I was expecting, at first. It starts with Lis moving to the village of Hollow Pike to live with her grown-up sister Sarah, to start over at a new school because she was being bullied. Yes, someone starting at a new school is something we've seen before in YA novels (a lot), but I like it. It's a good way for the main character and the reader to learn things at the same time, gradually, without having an info dump to get the reader up to speed.
In many ways, Hollow Pike is a story about bullying. Having come for her fresh start, Lis falls in with the 'popular' crowd, and watches as they bully other people. I hated seeing Lis just standing watching what her new 'friends' were doing. Even though I could sort of see why she didn't want to end up being picked on again, I think if she'd done something when she first saw what kind of people the girls were, and left to find other friends, she would have been fine. However, after an incident where Lis is seen talking to Queen Bee Laura's crush, the posse turn on her, and she finds herself a victim once more. The only good thing about this is that it leads are to some new friends, who actually seem genuine.
Of course the other big part of Hollow Pike is the witchcraft. In the first chapter, before she arrives, Lis dreams about crawling along a stream in the woods, and someone drowning her. It's a nightmare she's had a lot, and when her mum drives through a 'shortcut' in the woods to get to Sarah's house, Lis is shocked to realise that it's the wood from her dream. Witches are tied in to the history of the village - everyone knows it, but no one really believes it. Then a girl is murdered in the woods, and Lis's dreams get worse. Although she keeps telling herself she doesn't believe it, creepy things keep happening. She feels like she's being watched. Birds go quiet when she walks past. A creepy shop owner tells her that her dreams are a warning.
I spent the whole book trying to work out who the bad guy was. I was fairly convinced that there was something witchy going on, but still found myself questioning if that was just because of the stories about witches in Hollow Pike. I kept changing who I thought was behind everything, every time Lis found something new that seemed to point in a different direction. I really didn't guess who it was until it was far too late, just like Lis.
Bullying, in various forms, remains a theme of the book all the way through. I think it's a very good look at how it affects people, why people get caught up in it, and different kinds of bullying and prejudice. Woven through that is the paranoia of the witches, and trying to work out what is going on, if Lis is just imagining things, and if not then who is targeting her and why. It really is an excellent read, one of the best young adult novels I've read in a long time. I can't wait to see what James Dawson comes up with next. Writing this review, I realise just how well certain things were slipped in to the novel to emphasise the themes - I wish I'd had this book when I was trying to write english essays in high school, because there would have been so much to write about!
I could go on, but before you all get bored of reading, I give this book 10 out of 10. A brilliant, gripping story that fans of slightly more realistic young adult books will love.
~Ailsa
Posted by Ailsa at 2:05 PM