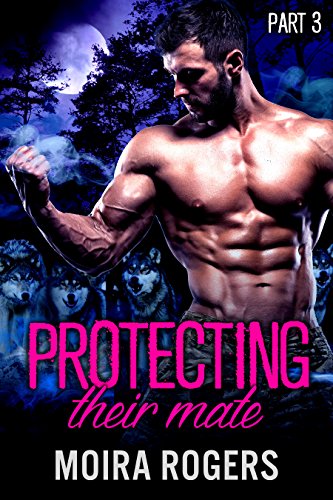 Description: As the full moon raises tensions–and appetites–Ashley indulges her wildest fantasies…and discovers what it truly means to belong to the pack. But Blake’s control is tested as outsiders descend on the pack’s territory, and Ashley discovers that following her heart may be the only way to find her mate.

Ashley’s heart longs for one man, but her wolf demands that she test herself against the alpha. Can she settle for a life of never knowing, or will she risk everything for Blake?

Protecting Their Mate was originally published as an eight part serial under the penname Mia Thorne. It has been repackaged, but the story remains the same.

My thoughts: This is the final part of a serialised story - here are my reviews of Part 1 and Part 2.

The sex in Part 3 is as steamy as in the rest of the story, and Ashley continues to explore her sexuality with all five other members of the pack. A deeper plot comes back a little here, which I thought was good - it got a bit lost in Part 2, I think. The threat of another pack who have made contact throws up some issues in this part of the story, as does the fact that the other pack have a female wolf of their own. Ashley's pack suspect that the other female might not be there willingly, so they come up with a plan to get to the bottom of things, and fix it if need be.