Review: Protecting Their Mate (Part One) by Moira Rogers 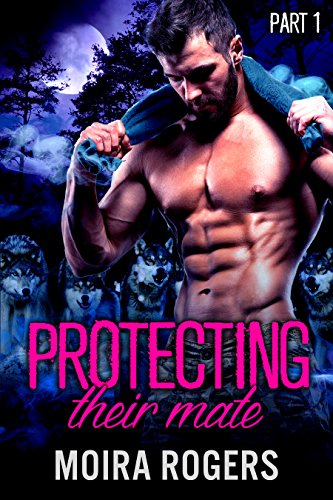 Description: Blake is on a mission from his alpha--to track down a werewolf whose parents dragged her into the human world years ago, one who may be in danger. He expects the lead to go nowhere, given how few wolves live among humans, but he discovers something rare indeed, caged in a basement: a beautiful, curvy woman gripped by the fever, ready to mate.

Ashley Todd has never fit in. She's always been too much--too big, too demanding, too aware of the wolf hiding beneath her skin. She's been locked away for months--been alone for a lifetime--and in walks Blake to save her from her prison. Her rescuer is hard, intense--a dominant wolf whose bossy attitude makes her growl...and yearn to submit.

Soothing Ashley's mating fever is Blake's responsibility--and his pleasure. Their passion is explosive, undeniable. But what started out as a job for Blake quickly becomes something more, and the toughest part of his mission looms: taking Ashley back to his pack so she can choose her permanent mate from amongst his brethren.

Ashley is drawn to dominant Blake, but meeting the rest of the pack reignites her desire. She is overwhelmed by her new life and all it entails, but embracing her inner wolf means embracing the truth: if she doesn't explore her attraction to the other members of the pack, she'll never find her forever mate .

Protecting Their Mate was originally published as an eight part serial under the penname Mia Thorne. It has been repackaged, but the story remains the same.

My thoughts: This is part one of a three part serialisation, with parts 2 & 3 to follow in the next couple of months. The story opens with a young woman called Ashley locked in a basement. She's fighting down her werewolf instincts, which are telling her 1) that she should shift into wolf form and 2) that she needs to find a mate. Luckily, she's soon rescued by Blake, another werewolf, who begins to correct some of the many lies she's been told about werewolf life. The most important thing is that as she's now in heat, only having sex will ease the pain she's experiencing and that she can sleep with lots of different members of the pack before it'll become clear who her mate is.

Blake and his pack have been searching for Ashley for a while, for various reasons. He's angry about the conditions he found her in but more than happy to look after her, doing anything she wants with his body...

Ashley has had a pretty horrible upbringing, but despite the host of revelations she gets as the pack bring her back to their home, she takes it in her stride. She's confident, and embraces the fun of getting to sleep with the other men in the pack, not just Blake.

It's a very sexy story, and there are also some hints dropped about problems in the wider werewolf community. I'm looking forward to seeing more about that in parts 2 & 3. It was a fast read, as you'd expect from part of a serial. I'm giving part one 6/10 - it was very sexy, but most of the plot revolves around that.