Stacking the Shelves is a weekly meme hosted by Tynga's reviews to show off the books you've borrowed, bought or been given this week.


I haven't done this for a couple of weeks, so here are my books. The first is an ebook. The other two I got this week in Edinburgh. I told myself "I can't buy more books!" But I was hunting around the charity shops for a new jacket, and found a couple of things I couldn't resist. It's money going to charity so it doesn't count as buying books ;-). All links go to goodreads.

Leave Your Mark, by Aliza Licht. This one is a bit different for me. It's non-fiction, sort of half advice book, half autobiography of Aliza Licht who is the head of public relations for DKNY. I saw a few promotional excerpts for this one, and since I'm applying for publishing jobs just now, I thought it would be useful to see her advice. I'll be reviewing this one sometime in June I expect. 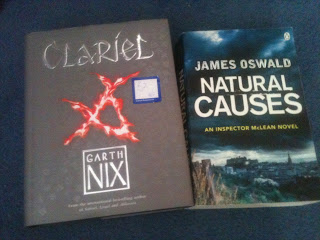 Clariel by Garth Nix. I love Garth Nix and his 'Old Kingdom' series is one I come back to re-read again and again. Clariel is set many years (a couple of hundred, I think) before the events of Sabriel. I think it might even be set before Touchstone is born, but I can't quite remember. I'm very excited to read this, I'll be getting to it very soon. And the shop had it for just £2 for the hardback! Can you blame me for buying it?

Natural Causes, by James Oswald. This is a crime novel, set in Scotland, written by a Scottish author. And yes, that is Edinburgh on the cover, for the curious. It appeals to me for all of those reasons! It started as a self published novel but he eventually picked up an agent who sold the series to Penguin. He's now also got a fantasy series being released, which I'd love to read too. This is definitely going to be coming on holiday with me this summer, if I don't end up reading it sooner!

Have you read any of these books? What did you get this week?