After Hello by Lisa Mangum 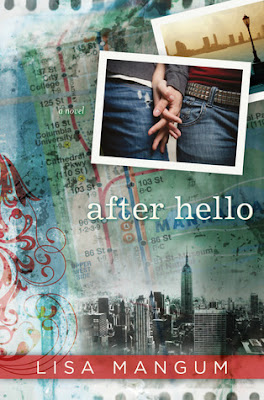 Sam ignored the lie he saw on her face. "I can't trade without knowing what's at stake."

"I thought the important thing was to keep things moving." Sara waved her hands in small circles in front of her as though stirring the air into action.


Sara is only in New York City for one day, a day she was supposed to spend sightseeing with her father after his meeting wrapped up. But her father's meeting runs long and Sara is left to her own devices. On impulse she follows a boy she sees leaving a bookstore wearing a Zebra Stripes hoodie, a band she loves that most other people haven't heard of. It's a decision that could lead to something great or something horrible, but the last thing she expects is for it to change her life.

Sam knows a girl is following him, but he can't decide if he should ditch her or let her catch up. He waits for her and meets Sara (without an h) for the first time. Even without knowing anything about her, the ever-observant Sam sees in Sara a kindred spirit, he just doesn't know why yet.

They spend the day together and whether by accident or design they end up on a seemingly impossible quest across the city looking for something that may not even exist. Sam teaches Sara the art of trading, promising you can get anything you want by starting with a sugar packet. Sara shows Sam that sometimes letting go isn't the same as letting go. They seem to click together perfectly, but they're both holding onto demons they're afraid of revealing. Sam and Sara know going in that there's an end in sight--Sara's flight leaves at noon the next day--and it's a looming deadline that makes their time together all the more special and their secrets all the heavier. Will the strange ties that bind them be strong enough to hold when their pasts come to light and their plans fall apart or will good-bye come far too quickly after hello?

I loved this book. I adored the feel of the city you get from it and I loved the characters. Sara wears her smile like a shield to keep people from seeing the pain she still feels from her mother's abandonment eight years ago and Sam is still coping (and running) from a tragedy that shattered the way he looks at the world. Sam has a unique way of seeing things and being able to see from his point of view (the book is told from alternating viewpoints) gave the story another level of depth the really drew me in. It took a few chapters to get used to the switch between first person (Sara's chapters) and third person limited-omniscient (Sam's sections), but otherwise the writing style had a flavor I enjoyed. The descriptions, comparisons, characters, and dialogue all seemed fresh and real and kept me reading until I'd devoured the book in one sitting. The only thing that bothered me: I wanted it to keep going! The book offers a resolution, but enough of the story continues after the last page that it's meant for either the reader to fill in the blanks or to set the characters in motion for a sequel. Personally, I'm hoping for a sequel.