Welcome, Caller, This Is Chloe by Shelley Coriell

Also posted on my blog. 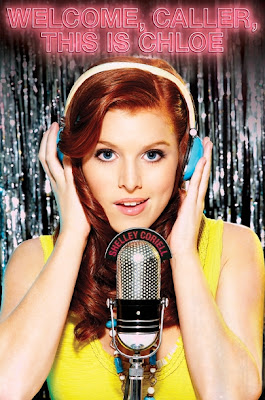 When you've been out in an ocean, stung by jellyfish, battered by waves, and circled by sharks in frosty pink lipstick, you grab the first life preserver tossed your way.

I faced every member of KDRS radio staff. I wasn't naked. I wasn't alone. And according to Duncan, I was needed.


Before school let out for winter break, Chloe was on top of the world. She and her two best friends were inseparable--and ultra popular--and she'd been crowned Mistletoe Ball Queen. Her Junior Independent Study Project (JISP) had been approved on the lives of soap opera villenesses and she could always make her friends laugh. But then, for no apparent reason, everything completely falls apart. Her best friends hate her and start spreading vicious lies through the school, the old guidance counselor retires and the new one un-approves Chloe's JISP, and her beloved Grams starts to succumb to her Parkinsons disease. Desperate for a new JISP--because it's the only problem she seems able to fix--Chloe ends up at the school-run radio station, KDRS. The only problem? No one wants her there. These kids, all outsiders of the school's social order, have formed their own little family and newcomers aren't exactly welcomed with open arms. But Chloe doesn't have any other options and the KDRS kids can't say no. The only one who doesn't seem to hate her is the radio's fix-it guy Duncan who is incredibly cute, but about as taciturn as Chloe is talkative. Can Chloe work her magic and put all the pieces of her life back together or do some things that break stay broken forever?

Before I start, I'm just going to say I love this cover. Is it the best cover ever designed? No, but it fits the book perfectly. The designers paid attention to things like the color of the main character's hair and her love of vintage fashion and added those details into this layout. It's colorful, glittery, and totally Chloe. Kudos to the team behind this. When I get published, I hope I have a team who really gets my book and can pull together a cover just as representative of the story. Now, for the actual contents...

Well, I loved those too! The characters were all unique with easy to differentiate voices and I found myself smiling a lot as I read. Shelley did a great job working in a lot of common high-school-age issues without treating them in the same way. Chloe is lambasted by her ex-best friends, but never seeks vengeance. She also doesn't go out looking to get her popularity back. Because of who she is, though, it comes anyway. The love interest between Chloe and Duncan is adorable and develops naturally. Throughout the book you see Chloe not only coming out of her comfort zone, but helping pull others out of theirs. She's funny, outgoing, intelligent, and kind. She may end up being a trifle self-absorbed at times, but, honestly, who isn't? Overall, I found her and the rest of the cast delightful and the book was a quick, fun read.


In the end, I was only left with a couple of questions: 1) What is Clem's story? The girl who runs the radio station is prickly as hell, but we never really get any background on her. 2) The shoes Chloe is always talking about sound expensive! Where in the world is she getting the money for those? How much does her side job as a promo girl at a Mexican restaurant pay exactly? Still, if those were the only biting, unanswered questions left at the end of the book, I have to say the author did a bang-up job of tying the loose ends together. I can't tell for sure, but I feel as though there might be a sequel buried in these characters. Maybe with Chloe taking the lead again, maybe not. All I know is I wouldn't mind taking a trip back into Chloe's universe one day.

Email ThisBlogThis!Share to TwitterShare to FacebookShare to Pinterest
Labels: Fiction, Sera Phyn, Shelley Coriell, Welcome Caller This Is Chloe, YA