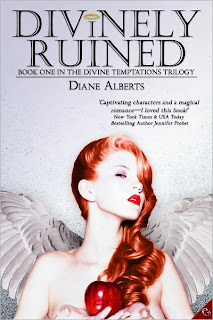 Description: She finally meets a decent man - after she's oath-bound never to touch men again!
Rebecca's life sucked before she became an angel. Crappy apartment, awful jobs, abusive boyfriends - it was no wonder she jumped at the chance to escape it all and become a real live angel. The problem is Rebecca's not very angelic, and she'll have to do more to earn her wings than end her love affair with the word f-er, frick.
Especially when she's assigned to save single father Tony Weis, whose less-than-pure thoughts wreak hell on a telepathic angel's nerves. It's all Rebecca can do to keep her hands off him... but when she loses her memory injuring herself to save Tony's daughter, now it's Tony's turn to be her angel and care for her. But will Tony's devotion tempt her from her angelic path, even if it means being human again?

My thoughts: Divinely Ruined is a sweet story about a woman who's been given the chance at a new life as an angel. Her first task is to save Tony, and that is immediately problematic. First, there's the challenge of making Tony let her in to help. Being an angel makes her telepathic which helps, but it also leaves her susceptible to the mental images Tony comes up with of them being very friendly together. Not on purpose (most of the time) - he just didn't expect an angel to be pretty and favour low cut tops. Each chapter starts with an Angel Rule, and Rule Number 2 is "never fall for your subject". Rebecca is so determined to do a good job and earn her wings, but Tony is very distracting, especially with his adorable daughter, Miranda.

I liked watching Tony and Rebecca start to trust and become familiar with each other, and then to properly care about each other. Rebecca connects with Miranda almost straight away and is an important part in bringing them together. The story is fairly short (less than 200 pages) but has a lot of character development packed in. There was one big thing Rebecca did that I got a bit annoyed with, near the end of the book - she reacts very badly to something Tony does, and I really don't think it was fair of her.

This is a sweet romance story with just a hint of angels involved, and was a pleasant read for an evening. It wasn't particularly 'deep' or needing lots of thought, but it was nice to have something light for a little while. I'll give this a 6 overall.