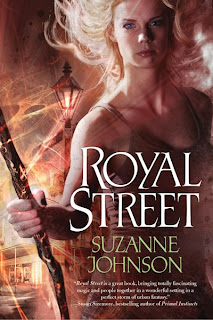 
Description: As the junior wizard sentinel for New Orleans, Drusilla Jaco's job involves a lot more potion-mixing and pixie-retrieval than sniffing out supernatural bad guys like rogue vampires and lethal were-creatures. DJ's boss and mentor, Gerald St. Simon, is the wizard tasked with protecting the city from anyone or anything that might slip over from the preternatural beyond.

While winds howled and Lake Pontchartrain surged, the borders between the modern city and the Otherworld crumbled. Now, the undead and the restless are roaming the Big Easy, and a serial killer with ties to voodoo is murdering the soldiers sent to help the city recover.

To make it worse, Gerry has gone missing, the wizards' Elders have assigned a grenade-toting assassin as DJ's new partner, and undead pirate Jean Lafitte wants to make her walk his plank. The search for Gerry and for the serial killer turns personal when DJ learns the hard way that loyalty requires sacrifice, allies come from the unlikeliest places, and duty mixed with love creates one bitter gumbo.

My Thoughts: I really like this book. Now that we've got that out the way, let me tell you a bit more about it. We meet the heroine, DJ, as she's meeting the ghost of a lascivious pirate, who she soon banishes. She then catches up with her mentor Gerry, and they dismiss the coming storm, Katrina, as something that probably won't do any more harm than any other storm, and think that people should stop scaremongering. Of course, every reader knows how it's really going to turn out, and I was biting my nails waiting to see if these people would get themselves somewhere safe, and then what would happen in the aftermath. At first it seems like they're going to be ok, but then a few days after the storm has passed, Gerry goes missing, and it's up to DJ to sort out the supernatural beasties that are sneaking in to the city, while she tries to clear his name. Enter Alex, the "grenade-toting assassin". Both Alex & his cousin Jake sound very hot, and I found it very interesting to read about the interaction DJ had with each of them. For a little while, I really couldn't guess which way things were going to go.

I like the way the relationships develop between all the characters, and the way that DJ changes over the book as she finds out some things about her childhood. In her quest to clear Gerry's name, she does come across some things that point the finger strongly against him, and I thought the way she reacted and changed because of that was very believable. Each character has a strong, realistic personality of their own, and the interactions between them were often very funny - I really like DJ's inner voice.

I visited New Orleans last September, and I think it's beautifully brought to life in the book - it made me very nostalgic for my trip. The way that the supernatural element is brought into the world is very interesting, I think - they seem to exist in a parallel, slightly in the past, world, and try to break through to our world/time - it's DJ's job to stop this sort of thing. I can't wait to read more about her adventures, and see what happens with her changing powers as she learns more about what she can do. I'm also very interested to see the after affects of the events at the end of this book.

I'll give this one 9 out of 10 - check it out if you like books by Kalayna Price, Ilona Andrews, or Jocelynn Drake.