I missed doing last weeks, so here are the rest of the books I picked up at World Fantasy Con in Brighton at the start of the month. I've been a little busy with uni work (it's essays time of the semester) but I'm planning to put up my write-ups of it this coming week. I'll also have more reading time now, so reviews will be back! *g*

On to the books! 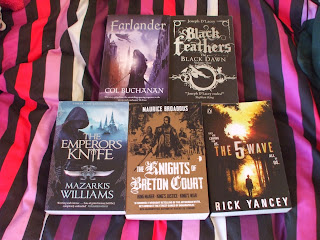 'Farlander' by Col Buchanan - Fantasy, sounds like it could be interesting

'The Emperor's Knife' by Mazarkis Williams - Fantasy, again don't know much about it.

'The Knights of Breton Court' by Maurice Broaddus - A new version of the King Arthur myth - I'm not particularly interested in Arthur stories, but this one looked different so I thought I'd give it a go - it's fairly far down the tbr pile at the moment though.

'The Fifth Wave' by Rick Yancy - this one sounds a bit mid-apocalyptic, and I've heard a little bit about it. I'm actually quite keen to read this one soon. 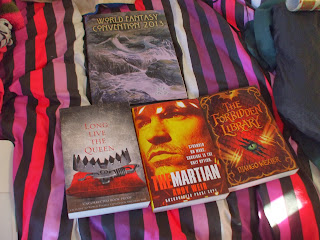 At the top of this one is the lovely commemorative program they gave to everyone, which features lots of nice pictures and some cool short stories.

'The Queen of the Tearling' by Erika Johansen - This is a proof copy, so the cover isn't final, about a 19 year old girl about to inherit a kingdom that's a bit of a mess, by the sound of it. I think this sounds really cool, and I'm hoping to read it soon. It doesn't come out till summer, so I won't be posting a review for a while though.

'The Martian' by Andy Weir - Don't know much about this at all, so it's fairly low in the pile again, but it could be interesting, I'll give it a go sometime.

'The Forbidden Library' by Django Wrexler - This one sounds really cool, it has an introduction letter from the author tucked inside that says it's built on the question of what if you couldn't trust the mentor figure there often is in fantasy books? I hope to read it soon, but again, it's a proof copy, not releasing until April, so it'll be a while till I actually post the review.

How about you? Leave me the links to what you got this week and I'll come check them out!

Last weekend I went to the World Fantasy Convention in Brighton, and one of the many awesome things that happened was they gave away a whole lot of free books. Since I came home with so many, and I don't anticipate buying any more for a little while, I'm going to split the haul over two Letterbox Love posts.

First of all, here are the three books I did actually buy: 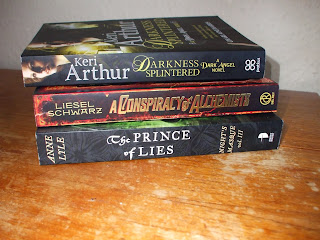 'Darkness Splintered' by Keri Arthur (Dark Angel #6)  - I've loved Keri Arthur's work for a long time now, and I was very excited to find this for sale (a little early) at the weekend, so I could get her to sign it! :) I've already started reading, and it's going well so far. Review or 'Thoughts on Books' post to come soon.

'A Conspiracy of Alchemists' by Liesel Schwarz - I had an e-arc of this back in the spring, and was really enjoying it, but unfortunately it expired before I could get to the end. I'm looking forward to reading the end of the story now.

'The Prince of Lies' by Anne Lyle (Night's Masque #3) - I'm currently half way through the audio of book 2, and was looking forward to meeting Anne Lyle at the con, but didn't have the book for her to sign, so when they had book 3 (again, a little early), I picked it up. I'll get to this one soon. 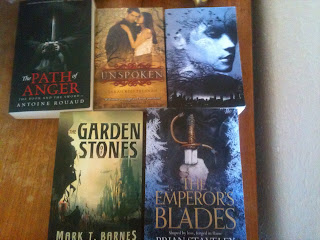 'The Garden of Stones', by Mark T Barnes - I wasn't sure about this one, but I really enjoyed hearing the author speaking on a panel, so I decided to give it a go.

'The Emperor's Blades' by Brian Stavely - This sounds like a great new fantasy series, and I"m excited to read it.

'The Path of Anger' by Antoine Rouaud - Another fantasy which I'm very excited to read, and on the spine it says 'The Debut of the Year' which I thought was fun :)

'Unspoken' by Sarah Rees Brenan - I've heard a lot about this from people who've already read it, and I think I'll have to keep the tissues close to hand, so I might wait until I have the rest of the series to cope with it.

'Banished' by Liz De Jager - This is the one I was most excited to see on the 'goodies' table - the cover was just revealed the other week, and it looks great! Liz was the author of the first book blog I ever read, and I'm looking forward to reading this story a lot.

There's the first part! So many books that I'm really excited to read.
Thank you to publishers, 47 North, Simon & Schuster, Gollancz and Tor for your generosity offering the copies.

What books did you get this week?
~Ailsa

Email ThisBlogThis!Share to TwitterShare to FacebookShare to Pinterest
Labels: Letterbox Love, Stacking the Shelves
Newer Posts Older Posts Home
Subscribe to: Posts (Atom)
The Book Bundle is a review blog run by Ailsa, a Marketing Executive at a London publishing company, and Emily Cross, an Irish PhD student. We review a wide variety of books, but lean towards fantasy, YA, UF, and romance. Check out the latest reviews to see what we're loving at the moment!