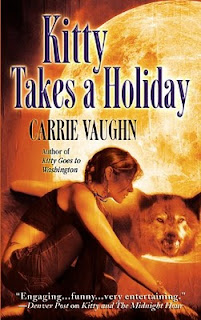 (Book 3 in the series, beware spoilers for earlier books!)
From the back cover: After getting caught turning wolf on national television, Kitty retreats to a mountain cabin to recover and write her memoirs. But this is Kitty, so trouble is never far behind, and instead of Walden Pond, she gets Evil Dead. First someone leaves grotesque animal sacrifices on her front porch to curse her, then werewolf hunter Cormac shows up with an injured Ben O'Farrell, Kitty's lawyer, slung over his shoulder. Two hotties and one kitty in a single-room cabin - can the situation get any more tense? When a wolf-like creature with glowing red eyes starts sniffing around the cabin, Kitty wonders if any of them will get out of these woods alive...
My thoughts: I'm not really sure how I feel about this book. I read it all in one sitting, starting at about 11pm with the intention of reading a couple of chapters, and stopping somewhere between 1 and 2 am. Normally, reading a book this quickly would be a sign that I really enjoyed it, but there are a lot of things about it that annoy me.
I read wanting to find out what happened with Kitty and Cormac. He's gorgeous, and in previous books you could feel the chemistry between the two of them in every conversation they had. Situations in this book change things. I think Kitty chose the wrong guy. I kept reading, waiting for it to be fixed, and it never was, and that just didn't sit right. A character seems to have been pushed away to the side, and I'm still sitting blinking going, 'Huh? Why?'
Some bits that I did like were the fall out from Kitty's TV appearance at the end of book 2. I think that was realistic, and I'm glad we get to see the impact of it not just on Kitty's life but on the supernatural and everyday world as well.
I don't know where I'm going to go from here with this series, if I'll read the rest of it sometime from the library, but for now I think I need a break from it. I like Kitty, but the books just don't quite fit with me, I'm afraid.
I give it 6 out of 10.
Posted by Ailsa at 1:04 PM 1 comment:

The Devil's Playground, by Jenna Black 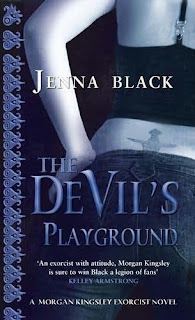 warning: this is the 5th book in the series, so expect references to the earlier books.
From the back cover: The Seven Deadlies, a demon club in Philadelphia, has always catered to the most attractive and desirable hosts. Recently, though, more and more of the lower dregs of society have been showing up with demons of their own - in alarming numbers. Exorcist Morgan Kingsley is sure that Dougal, the demon king's brother, is behind this, but isn't sure why. Is Dougal building an army to snatch the throne of the demons from his brother Lugh? If there's one person who can get to the bottom of this, it's Morgan, but caught between her mortal lover Brian and the demon she lusts for, it's going to take everything she has to keep her head - and heart - in the game.
I've put off buying this book because I didn't want the series to be over - I enjoyed it too much to want to let it go. When I eventually opened it, despite intentions of making it last, savouring this last of the series, I read it the same way I've read all Jenna's books - very fast.
The story starts when Shae, owner of the Seven Deadlies, pays Morgan a visit to tell her about the growing number of hosts visiting the club. Morgan gets Lugh's council involved, and they start investigating. There's also the conflict in her love life to deal with, though. Lugh expressing his interest in Morgan's long suffering boyfriend, Brian, puts more strain on that particular relationship. I felt like the pacing was a little different in this book to the others. It still picked me up and sucked me in just as much, but the characters have to spend a lot more time waiting for events to unfold than they have in previous books. I think I liked this - it sometimes annoys me when the events of a book take place over just a couple of days.
One of the great things about this book was that you could really see how far the characters have come over the series. The relationship between Morgan & Brian is much steadier than it has been. I've had mixed feeling about Brian in previous books - a lot of the time I felt like, if he couldn't put up with the involvement of the demons, and the way Morgan was, then he should shut up and leave. He is much more willing to accept things now, if still a little reluctantly.
This book is where things finally come to a head with Dougal, and the characters really have to come together and use all their alliances to protect the human and demon worlds from Dougal's plans, and deal with him once and for all.
As a final book in the series, I think it works. It ties up the important plot points, although I still have several questions about where things were going in the personal lives of some of the characters. I think my biggest disappointment with this book is that there aren't enough hot Morgan/Lugh times!
I love this book, and am definitely looking forward to whatever Ms Black produces next. 10 out of 10!
Posted by Ailsa at 7:50 PM 1 comment:

IMM is a weekly meme hosted by The Story Siren
I had wanted to get another review up before this week's IMM, but never mind, it just means you get two posts today! 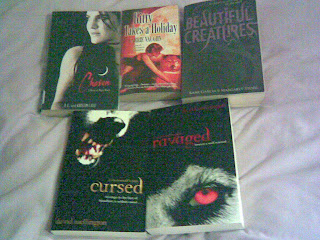 (Again, sorry for the poor quality! I'm going to try and find camera batteries this week!)
First up, from the library:
Chosen, by PC & Kristen Cast
Kitty Takes A Holiday, by Carrie Vaughn
Beautiful Creatures, by Kami Garcia and Margaret Stohl
Then, won from Book Chick City:
Cursed & Ravaged, by David Wellington
I've been wanting to read Beautiful Creatures for ages, so glad to find it in the library. I love the amount of recent YA stories they have in the library here, it's excellent, so much more than what they had in my tiny home-town library. I'm also really interested to read Cursed, as it sounds like a slightly different werewolf story than many I've read recently.
What about you? What did you get this week?
Posted by Ailsa at 11:54 AM 10 comments:

Email ThisBlogThis!Share to TwitterShare to FacebookShare to Pinterest
Labels: In my mailbox

From the back cover: All Grace Archer wants is to graduate from high school and get on with her life. But the Gods of Fate have other ideas. Attacked at graduation by a mysterious woman with gruesome henchmen, Grace is lucky to excape with her life. Rescued by a Fae warrior named Chris and her Aunt Phoenix, Grace learns that her mother was the Greek Goddess Pandora. Now Grace must protect her mother's urn from the crazed Demi-Goddess Lilith, who is determined to unleash its horrors on an unsuspecting Earth. As if her blood legacy is not bizarre enough, Greace begins to develop frightening powers that threaten to destroy her from the inside out. Can Grace find the strength to defeat Lilith? Can she learn to control her powers before she loses her mind?
The action kicks off straight away, with mysterious people crashing in to Grace's graduation in the opening chapter. Grace is understandably upset by this, and when she wakes up at home after being knocked unconscious, she starts demanding answers. Grace is forced to deal with the idea that her mum was a Greek goddess as Phoenix and Chris whisk her off towards the safety of a fae city. This tension of running away is kept up through the whole book. The characters are constantly aware of being hunted, and gearing up for a confrontation. When Grace begins to have dreams that seem to foretell the future, her fear of the things she's seen coming true adds to the tension - I thought that was done very well. When they eventually reach the safety of the city, Grace hurries to master her new powers in time to help save her friends.
Something I didn't really like was the romance between Chris and Grace. I thought it happened too fast, and just didn't seem too realistic at first. The rest of Grace's character is better - she definitely acts like the 18 year old girl she is supposed to be. Grace won't put up with being treated as unimportant or unworthy just because she's young and new to her powers. I especially liked her verbal confrontation at the very end of the book with one of the other gods.
I also liked the combination of Greek gods with the fae - I haven't seen that before, and it was an interesting mixture.
I'd recommend this book for the YA audience, and fans of new twists on old myths. I'm giving it 6 stars.
Posted by Ailsa at 12:12 PM 6 comments:

Email ThisBlogThis!Share to TwitterShare to FacebookShare to Pinterest
Labels: Fantasy, YA

In My Mailbox is a weekly meme hosted by The Story Siren.
I got some lovely books on Friday: 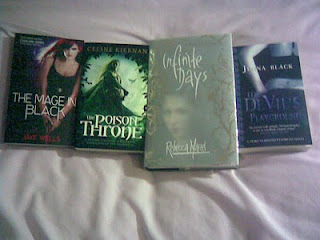 (Apologies for the quality - my camera ran out of batteries again, so I had to use my phone)
I didn't mean to buy any more books for a while, because there are so many cool YA books at my local library that I can't wait to read, but one of my friends wanted to go to a bookshop, and lo and behold, Waterstone's had 3-for-2 on all fiction... how could I leave without buying anything?
From left to right:
The Mage in Black, by Jaye Wells
The Poison Throne, by Celine Kiernan
Infinite Days, by Rebecca Maizel (won from My Favourite Books, thank you Liz!)
The Devil's Playground, by Jenna Black
Devil's Playground and Mage in Black have been on my 'to buy' list since they came out, so I'm so glad to finally have them. I read a review for The Poison Throne a couple of days ago, and was thinking I wanted to read more fantasy & politics stories. And Infinite Days was won, it turned up in the post the other day, and has such a cool cover! I'm looking forward to reading it.
Have you read any of these books? What did you think?
What books did you get this week?
Posted by Ailsa at 10:05 AM 8 comments:

Email ThisBlogThis!Share to TwitterShare to FacebookShare to Pinterest
Labels: In my mailbox
Newer Posts Older Posts Home
Subscribe to: Posts (Atom)
The Book Bundle is a review blog run by Ailsa, a Marketing Executive at a London publishing company, and Emily Cross, an Irish PhD student. We review a wide variety of books, but lean towards fantasy, YA, UF, and romance. Check out the latest reviews to see what we're loving at the moment!