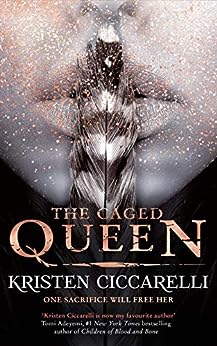 Description: Once there were two sisters born with a bond so strong that it forged them together forever. Roa and Essie called it the hum. It was a magic they cherished--until the day a terrible accident took Essie's life and trapped her soul in this world.

Dax--the heir to Firgaard's throne--was responsible for the accident. Roa swore to hate him forever. But eight years later he returned, begging for her help. He was determined to dethrone his cruel father, under whose oppressive reign Roa's people had suffered.

Roa made him a deal: she'd give him the army he needed if he made her queen. Only as queen could she save her people from Firgaard's rule.

Then a chance arises to right every wrong--an opportunity for Roa to rid herself of this enemy king and rescue her beloved sister. During the Relinquishing, when the spirits of the dead are said to return, Roa discovers she can reclaim her sister for good.

All she has to do is kill the king.

My thoughts: I loved so much about the first book in this series when it came out - it was one of my absolute favourite reads of 2017. So, I had high hopes coming into The Caged Queen, but I was also nervous: that was a lot for it to live up to! Dax and Roa were both introduced as secondary characters in The Last Namsara, with Dax in particular playing a crucial role. His actions in the last few chapters of that book are now bringing out consequences. It was really interesting to see how he handled the new challenges that came to him, and how he tried desperately to balance the needs of Firgaard, and helping and appeasing his wife.

There were parts of the book where I didn't like Roa much. I could understand some of the motivations for how she was feeling, but I thought she was being a bit hard on Dax a lot of the time. Maybe that's just because we'd seen more of Dax's story and background in book one, and I was biased to see him as a 'good guy', but I found it frustrating that Roa had made firm decisions in her mind about some things and wasn't going to re-examine those.

Another thing I enjoyed (and still found frustrating to read at times) was that Dax and Roa might have a political marriage, but they're still very much relearning each other, after being close as children and then spending years apart with a lot of history and politics falling into that time apart. They also both care a lot for each other, something that's very clear to the reader, but doesn't seem quite as straightforward to the pair of them! There is the usual mixture of misunderstandings, half-confessions, and attempts at denying feelings that you often get in romance plot lines, but even anticipating how some of those issues could lead to disasters I really enjoyed reading their journey.

I'm giving The Caged Queen 8/10. Thank you Gollancz for the review copy!
Posted by Ailsa at 1:21 PM