Book Review: A Debutante In Disguise by Eleanor Webster 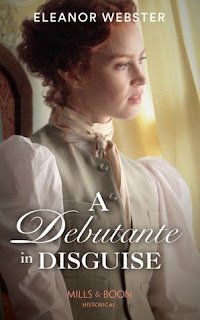 Description: A society lady... with a secret!
Determined to help people, Letty Barton has a double life – she’s a trained doctor! No-one must know 'Dr Hatfield' is actually a woman. Called to an emergency, she comes face to face with her patient’s brother, Lord Anthony Ashcroft… They’d once shared a spark-filled flirtation – now he’s a brooding, scarred war-hero. But how long will it be before he recognises her, beneath her disguise, and the sparks begin to fly once more…?

My thoughts:  Letty has been able to train as a doctor, disguising herself as a man and with the help of her brother and his wife. She is popular with the poorer people in her area, respected as a doctor, but lives with the constant fear of discovery. She is determined that she will not marry, never having cared for a man and determined to keep practicing as a doctor.

Tony lost both his best friend and his brother at the Battle of Waterloo, then his father soon afterwards. He’s left with scars, nightmares, and the responsibility for his family estates. He’s heavily dependent on alcohol when he meets Letty and his pregnant sister befriends her. It’s a huge risk for Letty to keep spending time with Elsie when Tony ask Dr Hatfield to be Elsie’s doctor, but she can’t suppress her need to help people.

I loved Letty’s conviction about being a doctor. She is absolutely set on what she is doing and why. She’s not one of these historical romance heroines who either finds a noble calling right at the end of the book, or realised that they can set aside what they’ve always planned to do in favour of marrying the hero. It was also good to see a hero who isn’t the gorgeous rake everyone finds attractive.

While there were many aspects of this book I enjoyed, I felt like there was a lot of potential that went unexplored. I would have liked to see a much more detailed development of Tony coming to terms with his scars and more of a look at him coping (or not) with the after effects of the battle. We very briefly see that he’s clearly an alcoholic, then all of a sudden he’s not drinking anymore. While some people can choose to just stop, most people who are dependent on something have to fight to build new habits without those vices. The author never explains why Letty is called ‘Lettuce’, either. It seems like it was just to make one small joke in the opening chapter. Those complaints aside, it was an enjoyable read, a nice little escape, which is what I always hope for with a historical romance novel. I’m giving A Debutante In Disguise 7 out of 10.
Posted by Ailsa at 8:56 AM