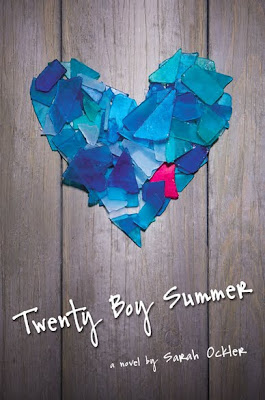 “When someone you love dies, people ask you how you're doing, but they don't really want to know. They seek affirmation that you're okay, that you appreciate their concern, that life goes on and so can they. Secretly they wonder when the statute of limitations on asking expires (its three months, by the way. Written or unwritten, that's about all the time it takes for people to forget the one thing that you never will).”

During the span of the average life, most people will fall in love and everyone will experience loss. Very few people will find love and then lose it almost instantly before the age of sixteen. This, however, is exactly what happens to Anna just after her life-long unrequited crush on her best friend Frankie’s brother Matt suddenly becomes requited. They share one glorious month of stolen kisses, secret glances, and midnight rendezvous and then on the way back from an ice cream run, Matt falls victim to an unknown congenital heart defect. Both Anna and Frankie’s families are devastated by the loss, but since they hadn’t yet revealed their no one knows how hard his death hit Anna. As Frankie’s parents retreat into silence, Anna becomes Frankie’s rock, her comfort, and her caregiver. She makes sure she eats, sleeps, and even tries to protect her from the trouble Frankie seems determined to get into. It isn’t until a little over a year after his death that this strange status quo is finally upset when Frankie’s parents decide to resume their family’s yearly vacation to Zanzibar Bay in California. Frankie unilaterally decides that they will conquer twenty boys in twenty days and that by the end of the trip Anna will have divested herself of the albatross hanging around her neck—her virginity. Anna goes along with this plan in theory, still holding onto the secret of her relationship with Matt and feeling guiltier about that secret every day. Theory clashes with reality when she meets Sam and starts feeling for the first time since Matt’s death. Does this mean she’s forgetting Matt? “What is the statute of limitations on feeling guilty for cheating on a ghost?” she asks herself.

Less about grief and more about coming back to life, Twenty Boy Summer catalogs Anna’s return to life. It covers friendship, trust, truth, death, grief, secrets, forgiveness, family, swimsuits, sunburns, sneaking out, virginity, and the fact that no matter how hard you try you can’t make someone else okay—they have to do that for themselves. Sarah Ockler tackles these questions through Anna’s eyes and you see all of her pain, her guilt, the loyalty she feels toward both Frankie and Matt, the pull of her new feelings for Sam, and the overwhelming pressure all this places on her shoulders. Ockler’s lyrical and at times profound prose guides you through the twenty days Anna and Frankie spend at Zanzibar Bay. Highly quotable, pieces of Twenty Boy Summer can be pulled out of context and applied to so many lives and so many situations. I was highly impressed by the quality of the writing and the beauty of some of Ockler’s phrasing. I felt as though she also did a good job showing how people react differently to loss, how differently people grieve. The only thing I wasn’t a huge fan of was the ending—this, however, is probably a highly subjective point and I can easily see how many people would disagree with me. Overall, Twenty Boy Summer is more than worth the read and Sarah Ockler is an author to keep on your radar for the years to come. I have a feeling her talent with words is only going to get stronger.