The Bitter Seed of Magic, by Suzanne McLeod 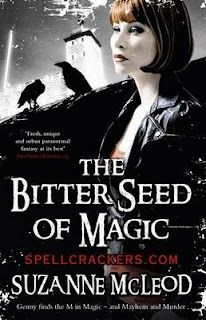 Publisher: Gollancz
Released: Feb 11 in the UK - out now! (US fans can order via Book Depository, and I think amazon.com will let you get the UK version, too)
Source: review copy from publisher & author
Book 3 in the series, see my review of book one here.
Warning: Contains spoilers for earlier books
Description from the back cover: Genny's an expert at cracking spells, but when it comes to cracking an 80 year old curse she knows she's in trouble, the sort that could change her life for ever - or end it in an instant.
On the surface Genny's life seems ripple-free. Finn - her boss and... well, Genny's not quite sure what else she wants him to be, but he isn't pushing for a decision on their relationship; the seductive vampire, Malik al-Khan has vanished back into the shadows; and the witches have declared her no longer a threat. But unless she can find a way to break the fertility curse afflicting London's fae, she knows this is just the lull before the magical storm.
Then a faeling - a teenager - is fished out of the River Thames, dead, and bound with magic, and Genny is called in to investigate. But as she digs through the clues, her search takes a sinister and dangerous turn, exposing age-old secrets that might be better left burried. It's not long before another faeling disappears, and Genny finds herself in a race against time to save the faelings and stop the curse from claiming its next victim - herself.
My thoughts: I love this series, and I think this might be my favourite so far! The characters remain just as strong as ever, which I really liked. And, as with the earlier books, the plot is interesting & complex enough that I had to go back and re-read a couple of bits to really fully understand what was going on. It means that the book can be just as enjoyable on a second read.
One of the things that I loved about this book more than the others was that there are a lot of developments in terms of relationships in this book. We learn more about what's been going on between Finn & Helen. (And by the way, I love the nickname Genny gives her - the Witch Bitch - it just made me smile every time I read it.) Genny also makes progress figuring out what she wants to do with Finn. I liked that there is a lot of Genny/Finn time, and also lots of Genny/Malik. Tavish comes in too, although not as much as the others, so whoever your favourite is, you should be happy reading this book. Although I sort of get Finn's reasons, there were parts of the book where I just wanted to shake him for the things he was saying - I think if I were Genny, I wouldn't have kept my temper. My personal favourite is Malik, though, and this book only added to that. I mean, we get to see him shirtless on Genny's bed. What's not to like about that? I understand his reasons for acting the way he does, but there was one particular scene where I was just thinking 'You stupid, idiot vampire!'. I love a book where I care this much about the characters.
Something else we learn a lot more about in this book is the fertility curse that's been hanging over Genny & the London fae in the previous book. It was really interesting to learn more about how that had happened in the first place. I liked meeting more of the fae, and that side of Genny's heritage, even if some of them were a bit strange! You also see the other side of that heritage - the vampire half. I think that's going to play a more important part in the books to come, and I'm looking forward to it.
I feel like Genny grew up a lot in this book, and I can't wait to see what happens in the next book. I've no idea where the series might go, but I'm hoping to see more about the vampires, and the results of the events in this book. It's a long time to wait, but in the meantime, I can always re-read this one again, can't I? In fact, I might just do that now...
If you haven't checked out this book yet, then I would definitely recommend picking it up soon! I give it 9 out of 10, I loved it.
~Ailsa
Posted by Ailsa at 4:28 PM