Book Review: Smoke in the Glass by Chris Humphreys 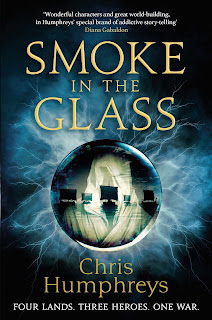 Description: A thrilling new dark fantasy series about immortality, war and survival, from the bestselling historical author Chris (CC) Humphreys
Three lands, peopled by humans and immortals. In Corinthium a decadent endlessly-lived elite run the world for profit and power. But when a poor, honest solider dies, and is reborn, everything changes. In wintry Midgarth, where immortals are revered as deities, one of them has realized that something - or someone - is killing the gods. And in Ometepe there is only one immortal, for he has murdered every other. Until one woman gives birth to a very special baby. Yet there is a fourth, hidden land, where savage tribes have united under the prophecy of 'the One': a child who is neither boy nor girl. Now they plan to conquer the world. Unless a broken soldier, a desperate mother and a crippled god can stop them...


My thoughts:
I thought the concept of a society where everyone knows immortals exist, but you don’t discover someone is immortal until they die, was really interesting and I couldn’t wait to see how the story unfolded. Told in third person, it dips into other narrators from time to time but for the most part we follow three people: Luck, an immortal in the cold country that sounds quite Nordic; Atisha, in a warm but mountainous country with volcanoes nearby; and Ferros, in a slightly less-defined country that has hills, grasslands and some sea areas. There are four countries in this world, each divided from the others by unclimbable mountains, uncrossable seas, etc etc, so while people might suspect that there is something else beyond their borders, no one has ever come from or gone to those places. In each country immortality works slightly differently, which I enjoyed seeing too.

At first, the stories of our three main protagonists exist slightly separately, but very quickly Chris Humphreys starts to connect them with the impending threat from the mysterious fourth country. As the reader you can see how the events in one place will affect the others, and for me that made it more compelling and added to the tension in each person’s storyline.

It’s a book about tyrants (and how to overthrow them), bringing diverse tribes together (when all they want to do is fight) and coming to terms with a new life path (when you we’re perfectly content before). And it’s about the enduring power and effect of hope.

I loved that the ‘gift’ of immortality had slightly different forms in each of the counties, and that within the plot Chris Humphreys explores how that has lead to different developments of society, without the exploration slowing down or detracting from the overarching plot. I think it’s a very clever idea, and not one I’ve come across before.

Chris Humphreys skilfully weaves together several different storylines without any feeling like they’re rushed over and still manages to keep the momentum of the plot going throughout the book. It’s an intriguing new look at immortality in a fantasy novel, and I highly recommend it. This is the first in a series, and I’ll definitely be looking out for the sequels. I’m giving Smoke In The Glass 8 stars!
Posted by Ailsa at 1:53 PM